Smoke across the nation from wildfire activity. Image via AirNow.

Air quality across the nation is now suffering from the intense wildfires burning throughout the Northwest.

Washington, Idaho, and western Montana are particularly affected this week by the smoke emanating from fires in those areas, but the loss in air quality is by no means limited to those states. Smoke has drifted as far east as North Dakota in recent days, and the haze in Utah, Colorado, Nebraska, and Kansas is being at least partially fed by wildfires in the north. 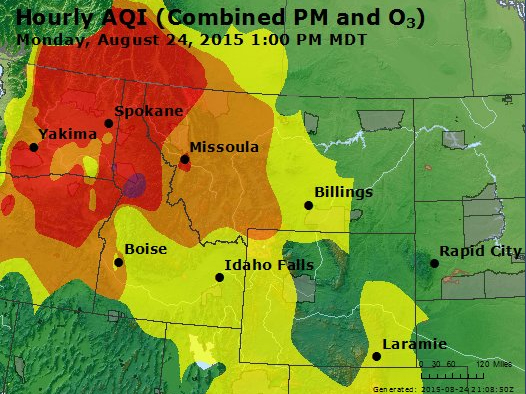 Air Quality in the Northwest. Image via AirNow.

To see an animation of how smoke has traveled in the area today, check out the AQI Loop found here.

The Air Quality Index (AQI), a system developed by the EPA to calculate the level of pollutants in the air on a scale of 0 – 500, currently rates Spokane, WA as 164. This puts the city into the “unhealthy” level, which the EPA defines as a situation where “everyone may begin to experience health effects; members of sensitive groups may experience more serious health effects.” Similar ratings were found throughout most of Washington state, north Idaho, and western Montana over the past few days, and meteorologists and health experts are advising residents to limit their exposure to the outdoors as a result.

For contrast, Beijing, a city infamous for its low air quality and impenetrable haze, has a current air quality rating of 55 (moderate).

The haze in the U.S. is expected to lift in many areas later this week, but populations in valley bottoms can expect to see the smoke linger just a bit longer than other areas. In western Montana, the air quality for Libby (Kootenai Valley) and Kalispell (Flathead Valley) were both ranked as “very unhealthy”, defined by the DEQ as “Health warnings of emergency conditions. The entire population is more likely to be affected.”