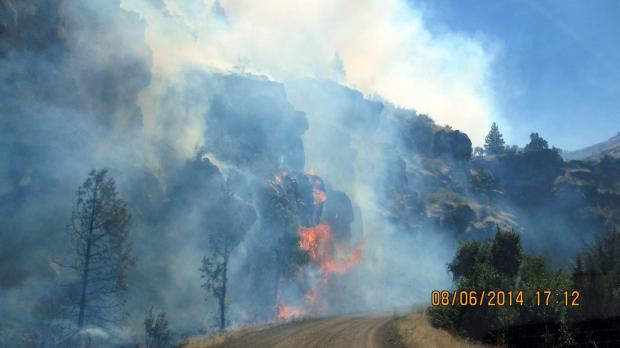 The South Fork Complex Fire near John Day, OR. Photo via InciWeb.

Low humidity and a risk of thunderstorms make for low expectations on the South Fork Complex Fire this week on the Malheur National Forest in Oregon.

The South Fork Fire began on July 31st about 20 miles southwest of John Day, OR, and has grown to over 60,000 acres. The Oregon National Guard has joined with nearly 700 firefighters to battle the blaze, with progress being made yesterday in the Murderers Creek Drainage as well as on the north and east lines of the fire. However, a Red Flag warning has been issued for the area beginning today and going through Tuesday. The low relative humidity isn’t expected to recover overnight, and any thunderstorms will potentially increase fire behavior via downdrafts.

With an expected increase in wind and spotting occurring at up to one-eighth of a mile, some are worried that the fire could push its way five miles north towards the community of Dayville, OR. A Level 1 evacuation alert has been issued for residents and campgrounds in area surrounding the fire near John Day and Dayville, and with the fire only 25% contained thus far, residents are encouraged to be prepared to leave at a moments notice.

Up-to-date information on the South Fork Fire Complex can be found via InciWeb.